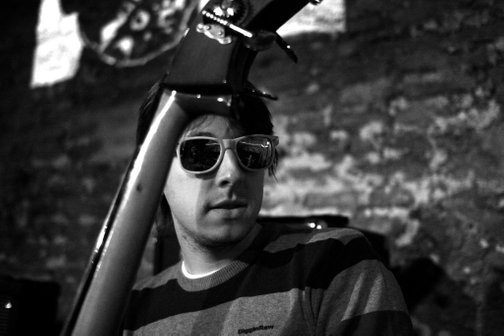 Ernesto Larcher is a young double bass player and composer with a wide formation in both classic and modern music. As a jazz musician he studied in Escuela de Música Creativa (EMC) of Madrid with Bob Sands, Bobby Martínez, Germán Kucich, Carlos Barretto, etc. He founded the KB Connection quintet winning awards like the first prize of Young Creators INJUVE 2009, first prize of Fusion Jazz Band Competition, organized by FNAC y Mans Paideia 2011 and also the second prize in the International Jazz Competition of Palma de Mallorca 2010, among others. He performed with this group in Jazz Festivals of Ibiza, Mallorca, Lugo, Madrid, Getxo, Gandia and Sardinia. He also was honored to share stage with artists like Kenny Barron, Michel Camilo and Chucho Valdés.

As a classic musician he obtained the Professional Degree at Adolfo Salazar Conservatory of Madrid. There he studied for seven years with maestro Daniel Machado and attended advanced classes with Antonio García-Araque, soloist of the National Orchestra of Spain (ONE). He was member during two years of Youth Orchestra and Choir of Madrid (JORCAM).

In 2017 he got the 'New York Jazz Master' degree from Prins Claus Conservatory in Groningen (The Netherlands) and in New York, where he lived for five months and had the opportunity to study with musicians like: David Gibson, Earl McIntyre, Michael Mossman, Jonathan Kreisberg, Michael Kanan, Marco Panascia, Joe Martin, Paul Gill and Boris Kozlov. There in New York he performed in different venues, like Sylvana and Shrine (Harlem), On Now Lounge (Manhattan) and in ShapeShifter Lab (Brooklyn) where he played with the brazilian guitarist Chico Pinheiro.

Nowadays he lives in Madrid where he combines his job as an arranging teacher at Escuela de Música Creativa and performances with different projects.